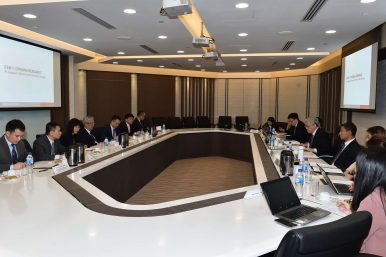 Earlier this week, Vietnam and Singapore held the tenth iteration of their annual defense policy dialogue as scheduled. The holding of the interaction once again put the spotlight on the development of bilateral defense ties between the two Southeast Asian states.

As I have noted before in these pages, though contemporary Singapore-Vietnam relations had initially been under the shadow of the Cold War, the two countries established diplomatic ties in 1973 and have looked to strengthen relations even further over the past few years, with the inking of a strategic partnership occurring in 2013.

That includes the defense side as well. Defense ties have included a range of interactions, including visits, courses, exchanges, training, information sharing, and an annual policy dialogue across a range of areas that were placed under a framework of a defense cooperation agreement back in 2009. And they have continued developing over the past year or so despite some challenges, with last year’s commemoration of the 45th anniversary of the establishment of their diplomatic ties and high-level visits and exchanges continuing on this year as well.

One of the key defense-related interactions is a defense policy dialogue (DPD) that has been held at the deputy minister level between the two sides. The last iteration of the DPD was held last November in Singapore, and it saw both sides take stock of military cooperation and discuss a range of issues including the regional security architecture, competition among major powers, the South China Sea issue, and non-traditional security challenges.

This week, this aspect of the relationship was in the spotlight with the holding of this year’s iteration of the defense policy dialogue. The tenth dialogue between them took place as scheduled on June 17 in Ho Chi Minh City and it was co-chaired by Vietnam Deputy Defense Minister Nguyen Chi Vinh and Permanent Secretary for Singapore’s Ministry of Defense Chan Yeng Kit.

Per Vietnam’s defense ministry, during the dialogue, both sides discussed the state of their defense relationship, focusing in particular on results in areas such as language training and the sharing of experiences in disease treatment. They also exchanged views on regional and international issues of common interest, including the state of the Asian security environment and the evolution of multilateral institutions, with Vietnam set to take up the ASEAN chairmanship in 2020.

At the conclusion of the dialogue, both sides also signed a cooperation agreement between their defense ministries, in line with the standard practice of updating their cooperation plans carried out in three-year increments. The new agreement will be for the duration of 2019-2021.

Unsurprisingly, no further specifics were publicly disclosed by either side on the private deliberations, including the specific contents of the new cooperation plan. But keeping a close eye on progress with these objectives in the coming years will give observers a better sense of how aspirations are translating into reality in the Singapore-Vietnam defense relationship.