Last week, a Russian state-owned defense firm officially announced the start of operations for a new maintenance facility in Vietnam. The development spotlighted some of the ongoing collaboration between the two sides despite the wider challenges that have been evident in the defense aspect of the relationship in recent years. 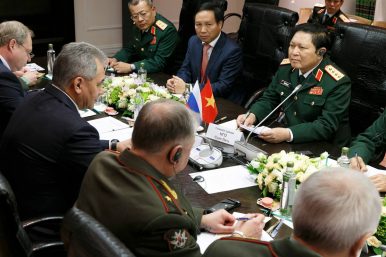 A photo from a previous Russia-Vietnam defense engagement.
Image Credit: Facebook/Ministry of Defense of the Russian Federation

As I have observed before in these pages, Vietnam and Russia have a defense relationship that dates back to the Cold War. Despite some challenges for ties as Vietnam engages newer partners such as the United States and Russia’s regional and international behavior attracts greater scrutiny, some advances in this realm of ties have continued as Hanoi continues to modernize its military and Moscow seeks a stronger defense presence in the broader Asia-Pacific.

That has been evident over the past year or so as well, whether it be headlines about new Vietnamese orders of Russian equipment – with Moscow traditionally being Vietnam’s biggest partner in this respect – or visits and exchanges that have reinforced the continued significance of the relationship for both sides.

A case in point came last October, when UEC-Klimov, a subsidiary of the United Engine Corporation which is part of Rostec, and the Vietnamese company Helicopter Technical Service Company, signed a distribution contract concerning service maintenance of engines. The agreement paved the way for potential next steps, including the setting up of a center to perform the services that were described.

Last week, this aspect of Russia-Vietnam defense ties was in the headlines again with the official announcement of the opening of a new helicopter engine facility in Vietnam related to the agreement inked last October. Russian defense industrial group Rostec announced the opening of what essentially constituted a new helicopter engine MRO facility in Vietnam.

Per Rostec in an April 22 statement, the MRO center – characterized as a “integrated logistics support center for repairing helicopter engines” – had begun operations in the Vietnamese city of Vũng Tàu, an area where the Vietnam People’s Air Force (VPAF) and some commercial operators have bases. The facility, set up by UEC-Klimov, is equipped with “all the necessary equipment, spare parts, and assemblies to provide repairs and engines designed by UEC-Klimov.” The facility operates on space occupied by Helicopter Technical Service Company, which provides service maintenance for Russian-made helicopters and acts as a distributor of the TB3-117 and VK-2500 engines that Russia is helping maintain.

While specifics remain unclear, the work that is proceeding at the facility includes some sharing of expertise as well as training. Rostec said the Russian side is providing spare parts and personnel training for engine and gearbox maintenance, while the Vietnamese side was providing support personnel to accompany the working process, with some of them having already received certificates from UEC-Klimov on successful familiarization with some aspects of the repair process. Repairs on the first helicopter engine had recently been completed at the facility, and that by the end of April, four more engines in use in Vietnam would go through repairs at the center.

Interestingly, Rostec itself cast the center as part of a regionwide effort, thereby playing into perceptions that this is part of a wider effort by Russia to strengthen defense collaboration with Asian states. Viktor Kladov, Rostec’s director for international cooperation and regional policy, said there were plans to expand helicopter repair and support services to India, China, Indonesia, Malaysia, Cambodia, Thailand, Myanmar, Laos, Australia, Bangladesh, and Sri Lanka, in addition to Vietnam. Those sorts of broader strategic calculations only reinforce the importance of paying attention to these individual efforts undertaken by Russia in the region.