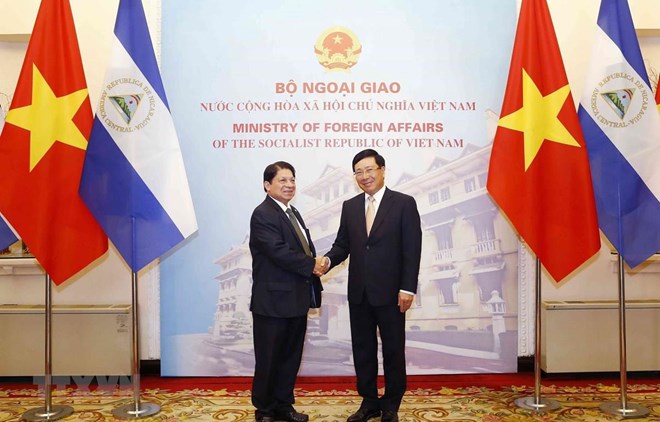 The official made the statement at his talks with host Deputy Prime Minister and Foreign Minister Pham Binh Minh in Hanoi, expressing his admiration for Vietnam’s heroic history and reform progress.

For his part, Minh affirmed Vietnam always appreciates the support of the Nicaraguan Government and people toward its past struggle for independence and current national construction.

He said Vietnam wants to further enhance the bilateral cooperation for the common development of the two nations.

Both host and guest agreed to consolidate the traditional political ties and mutual trust between the countries, increase delegation exchanges, and carry out negotiations and signing of pacts that form the legal framework for bilateral collaboration.

They said it is necessary to create favorable conditions for linking Vietnamese and Nicaraguan firms in trade, agriculture, aquatic farming, health, construction, infrastructure, energy, and telecommunication.

The officials also highlighted their concurrence with boosting the Vietnam – Nicaragua cooperation across the fields of defence, culture-sport, and tourism

The sides said they will continue working together and supporting each other at international organisations and multilateral forums.

The Nicaraguan FM is paying an official visit to Vietnam on September 5 – 7. As part of the visit, he met with head of the Party Central Committee’s Commission for External Relations Hoang Binh Quan and leaders of the Ministry of Industry and Trade. He also paid tribute at the mausoleum of late President Ho Chi Minh and toured a number of historical and cultural sites in Hanoi.