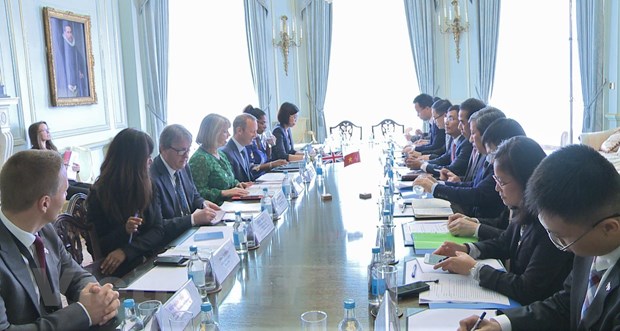 LONDON — Việt Nam and the UK will set up a specific organised crime working group to fight human trafficking and child sex abuse.

The issue is among the agreements during a meeting between Deputy Minister of Foreign Affairs Tô Anh Dũng and the UK’s Minister of State for Foreign and Commonwealth Affairs Harriett Baldwin in London on Tuesday.

During the meeting, the two supported the establishment of a new Joint Serious Organised Crime Working Group to coordinate policy development and project delivery in areas of modern slavery, human trafficking, child sexual exploitation and illegal transfer of goods through customs.

The signing of a new Memorandum of Understanding between the UK Border Force and the General Department of Việt Nam Customs, as well as the review and evaluation of the Returns MoU between the UK Home Office and the Vietnamese Ministry of Public Security will reinforce the importance of cooperation on these issues.

The two officials welcomed the sustained progress in their strategic partnership, and stressed support for the rules-based international order, free trade, sustainable economic growth, education and cultural exchanges at their 7th strategic dialogue in London on Tuesday.

They said the two countries strongly advocate global free trade, praised the signing of the EU-Việt Nam Free Trade Agreement (EVFTA) on June 30, and are looking forward to the continuity of trade relations after the UK leaves the EU, including through transitioning the EVFTA.

The diplomats discussed the UK’s proposal on transitioning the Comprehensive Partnership and Co-operation Agreement (PCA), which will boost the relationship between Vietnamese and UK firms to enhance competition and productivity.

Việt Nam and the UK are committed to working together in multilateral forums. The UK welcomes Việt Nam’s election as a non-permanent member of the UN Security Council, and both sides expect close co-operation in maintaining international peace and security during Việt Nam’s tenure, covering women, peace and security, post-conflict reconstruction, and global non-proliferation mechanisms comprising disarmament, de-mining, non-proliferation of weapons of mass destruction, and resolution of regional issues such as the de-nuclearisation of the Korean peninsula.

They reached consensus on close collaboration during Việt Nam’s Chairmanship of ASEAN in 2020. They will work together to prepare for the COP 26 Climate Change Conference to strengthen commitments to reducing emissions and increasing the use of renewable energy in Việt Nam.

Sharing views on recent developments in the East Sea, both sides expressed support for the peaceful solutions of any dispute in the waters on the basis of international law, including the UN Convention on the Law of the Sea (UNCLOS), helping promote peace, stability, development and prosperity in the region.

Both sides welcomed increased co-operation in defence, in particular the initiation of the Defence Policy Dialogue, high-level defence related visits and cooperation on UN Peacekeeping, including the deployment of the Vietnamese level 2 field hospital in South Sudan.

They acknowledged the key role of education in the relationship and welcomed the renewal of the decision establishing the educational and cultural status of the British Council in Việt Nam. They also emphasised the importance of strengthening bilateral cultural diplomacy to deepen the bonds between the two countries.

Earlier, Deputy FM Dũng had a working session with UK Prime Minister’s Trade Envoy to Việt Nam, Laos and Cambodia Ed Vaizey on Monday, during which they agreed to boost cooperation to ensure that trade and economic activities will not be affected by Brexit.

Vaizey expressed his hope that Việt Nam and the UK will soon ink a bilateral trade deal on the basis of the EVFTA’s framework. — VNS