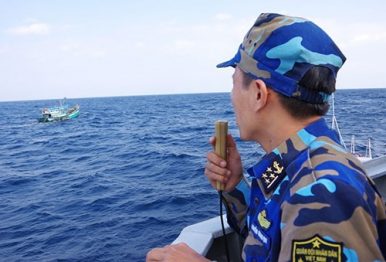 Last week, Thailand’s navy chief was in Vietnam for a visit. The pre-arranged trip spotlighted some of the ongoing activity within the maritime aspect of the relationship between the two Southeast Asian states, amid wider developments in their domestic and foreign policy.

As I have noted before in these pages, while the relationship between Vietnam and Thailand was characterized by animosity for much of the Cold War, it has gradually warmed since, including in the defense domain to a certain degree. The security aspect of ties has grown to include aspects such as dialogues, visits, and training. There is an emphasis on the maritime domain as well, be it on addressing challenges such as transnational crimes or the regulation of fishermen in maritime boundaries – a particularly contentious issue for not only Vietnam and Thailand but also other Southeast Asian countries.

That has continued on into 2019, even amid broader changes in both countries’ domestic and foreign policies. In addition to ongoing developments such as the holding of this year’s iteration of the new Defense Policy Dialogue, inaugurated last year, there have also been additional elements of focus in 2019, with one notable one being that Thailand and Vietnam are holding the annually rotating ASEAN chairmanship in 2019 and 2020, respectively.

This week, the maritime aspect of the relationship was in the headlines again with the visit of Thailand’s navy chief to Vietnam. Luechai Ruddit, commander of the Royal Thai Navy, was on a pre-arranged working visit to Vietnam.

Luechai’s visit comprised of a series of interactions. In terms of meetings, he met with Vietnamese officials including Deputy Defense Minister Phan Van Giang, who hosted a reception in his honor on June 18 at the headquarters of the Vietnamese defense ministry.

During that meeting, both sides took stock of existing maritime collaboration and also discussed other regional and international issues of common interest. There was also a reference to each supporting the other during their ASEAN chairmanships in 2019 and 2020, including on defense-related interactions.

The two countries also discussed future opportunities and challenges for their cooperation. On the opportunities side of the ledger, Luechai made reference to joint patrols and training as being areas for further development. And the statement from the Vietnam defense ministry also said that the two sides discussed “fishermen-related issues” and how they would be resolved in a lawful and humane way – an indication of challenges that remain in this domain despite continuing efforts by both sides to foster better ties.